(Today’s snippet from Crossing Seasons is inspired by the One-Minute Writer and the Daily Prompt.)

Jacob pulled down the fine china. “That isn’t your mother’s recipe is it,” he asked.

“No, it’s my grandmother’s,” Deborah said, adding a bit more salt. “Can’t have a holiday without it.”

“This may be our first Thanksgiving and all, but we may want to consider our own traditions.”

She kissed him on the cheek. “We can begin with the plates. Don’t those belong in a museum?”

He laughed. “These have been in my family as long as that recipe has been in yours.”

“Are you sure you want to start that discussion?” Deborah pointed to the camera atop the bookcase. “Want to set the timer on that? I say our tradition starts now.”

Jacob raised an eyebrow. “A photo?”

“Yes, for every meaningful meal we share during our marriage.” 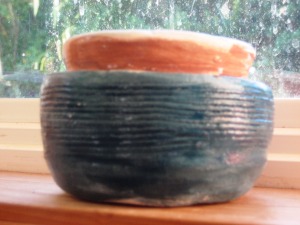 Today’s snippet is in response to: Today’s Writing Prompt: I Built That/Today write about something you made by hand.

Deborah Knoll set the last of the pieces on the windowsill, wondering if it was wise to fill them with herbs and petals from the gardens.

What if the guests didn’t like it? What if it caused an allergic reaction for someone? What if she was counting her hopes before the doors even opened? Each foolishly folly fell like clinks on a glass, just aiming for a breaking point.

Deborah didn’t realize Jacob was outside until he hollered for her. She tied back the curtains she had sewn only hours before, then pushed the windows outward to rest against the shutters.

Hands on his hips and oblivious to the streaks of dirt on his face, Jacob looked like the young man she struck with her car how many years ago?

“I remember when all I had to do was toss pebbles against your window to get your attention. Should I learn to make a rocket launcher next time?”

“Well, too late to turn back now. Half of our savings is invested in the ground, the other half’s in the house. Relax. We can’t do any worse than, say, ‘Mr. Blandings Builds His Dream House’.”

“What if our guests rate this along the lines of ‘Mr. Hobbs Takes a Vacation?’ Then what?”

“Save it for ‘The Philadelphia Story.’ Now get down here and help me with the salad pickings, will ya? Or I’ll probably have you yelling at me for us suffering fried green tomatoes.”

Deborah sighed. “You’ve yet to try that dish, you know.”

From where she was, it didn’t seem so bad after all.

“I only asked for a new frame,” Deborah lamented when she entered the writing room. “What on earth did you-?”

Jacob looked over his shoulder, screwdriver clenched between his teeth, sleeves soaking wet. “The frame you picked for the painting was all wrong, and worn, and…well, it fell apart. A few pieces earned me two-points, by basketball standards, not that the goldfish liked it.”

Deborah looked from the fish tank to his arms and then pointed to the burnt out light. “Uh huh.”

“Went to move the tank, but that bench is crappy. Did you know the paint’s faded on the wall where-?”

“Uh huh,” she repeated, staring down at the remains of her writing bench.

“Went to plug in the drill, to fix the other problem I found, with the stand the fish sit on and blew a fuse.”

“Don’t tell me you’re planning on painting, dear. That’s why I hang up pictures, so you don’t have to paint, not after last time.”

Jacob made a face. “Do you want a frame for this or not?”

“Nah, you’re fired, old man. First strike. Get out.” She pushed her husband out of her sanctuary turned puzzle room, wondering how a simple request could go so wrong.

(The above was inspired by a Daily Post Prompt)

Shells and Forget-me-nots by Tommia Wright

“Do you remember when we got married,” Deborah asked as she burrowed under the quilt.

“I believe they call that an anniversary, dear,” Jacob said without looking away from the book he held at arm’s length, refusing to put on his glasses.

She grabbed the book of sonnets with one hand, cupped his chin to face her with the other. “You believe you’re going to make it to your next birthday, don’t you, old man? I’m trying to be serious here.”

“Funny, I thought you always were.” He kissed her forehead before she could protest. “Yes, dear, I remember. My brother, the witness, Mrs. Helen our guardian. And our parents refusing to talk to us for more than a month.”

Deborah glanced at the dog-earred page, a pet peeve of hers, yet kept her silence. “I don’t think I ever felt so scared in my life, aside from the day I thought I killed you, I mean.”

“Knocked me off my feet before then,” he whispered as the winter winds howled on the other side of the walls. “What brought you back to-?”

“I’m afraid of forgetting. Sure, I give you grief for making me look for your glasses or wondering where I wrote check number 214, but… Joel, there are days I can’t remember what happened the day before.”

He hugged her tighter. “Considering we’re keeping track of three kids, two parents and a stubborn aunt and uncle, it’s any wonder we remember who the other one is anymore. Don’t worry, though, love. If you go senile, I’ll walk along that path with you. Then we can both watch our memories vanish in the sands as the waves wash over time and again.”

Deborah smiled, relieved and tired. She didn’t have the energy she used to and couldn’t help but wonder how she expected  them to keep up with the grandkids, too. “Want your book back?”

Jacob shook his head, reciting the sonnet instead, his soft voice lulling her into a sweet sleep on the sofa, in his arms.

So the goal is to begin revising the NaNo projects and make them into something possibly publishable. Today’s piece is from the first NaNo – Crossing Seasons. Not quite the beginning, but close to it.

Deborah Hansen laid the item on the desk with a thud, forcing Jacob Knoll to look up from his sketch.

“What’s this,” he asked, removing his glasses.

“Put your glasses back on if you’re asking me,” she said before giving him a wry smile as she sat on the corner of the desk. “Consider it a belated replacement gift. Don’t worry, it isn’t filled with cash. If it was, I would have paid off your brother in ones.”

Jacob squinted at her while slowly opening the case. “If a bomb goes off-.”

“Bang; we’re dead.” Deborah bit the inside of her cheek as she saw how young Jacob looked when his dark hair fell forward. If they had met in high school there was no way she would have graduated with straight-A’s, she thought, wondering what kind of instrument she would have played in band just to sit beside him. “If you weren’t such a non-traditionalist-.

Jacob shrugged. “If it helps, I have been telling people you hit on me first.”

She thought back to her first encounter with him.

“Don’t you ever watch where you’re walking?” Deborah rolled down the window on her side of the car, trying her best not to let her anxiety show too clearly. As it stood, she was just thankful that she hadn’t killed the guy.

“Yeah,” the guy said as he held on to the hood of the car for balance.  “I was walking in the crosswalk when I foolishly assumed the stop sign was something you saw.”

She debated between getting out of the car or staying inside for her safety; not as if the wiry gentleman at the front of her now chasing down loose pieces of paper was a serious threat to her. Guilty and concerned, she got out of the car to see the extent of the damage, sucking in her breath the moment she saw the shattered case under the front wheel on the passenger’s side.

“Sorry about your fiddle,” she said.

He clasped the case shut before she could see the contents. “For your information, they called it a violin.”

“That’s what I said – fiddle.” She spied a missed paper trapped by the car tire . “Look,  there’s this invention called a briefcase; maybe you  heard of it? Or you may want to consider switching over to a backpack or something that doesn’t pop open so easily.”

He smirked. “You may want to consider a car that has better brakes.” His possessions held close to his chest, he walked around the car once, clicking his tongue when he returned to where she stood.

“What?” She hated the look she saw on his face, the one that reminded her of her sister. “What is it?”

He avoided her question as he held a hand out. “You wouldn’t happen to have a couple of quarters, would you? I need to make a phone call.”

She had a dollar’s worth left, nothing more, and nothing less. “To your lawyer?”

“Very funny,” Deborah said as her shoulders slumped. How could she excuse her lateness for a job interview she needed, she wondered?

She watched as he folded himself into the small phone booth, his possessions still in hand. At least he had the decency to face her while he talked, she thought. It kept her from guessing what he was saying about her. Granted, she couldn’t hear him from here, but she wasn’t going to go over there to eavesdrop on him, either. He seemed like a trustworthy fellow, not bitter – something that surprised her. What she expected as a justified response from him proved wrong for her.

It amused her to watch him reshuffle his things, shoving things into the case he had, he plastic bag a complete loss.

When he returned, he didn’t seem as disheveled as when she had first seen him. “He’ll be here in about twenty minutes,” he said, leaning against the hood of the car with her.

“Deborah,” she said holding out a hand, a sheepish smile on her face.

“Jacob,” he said, returning the gesture.

Hard to believe a month had already passed since then, a month for Deborah to save and sell what spare change and loose knickknacks she had to barter for the case. The fact Jacob smiled back at her brought relief, and hope, that maybe it wasn’t a mistake to stay in this town.