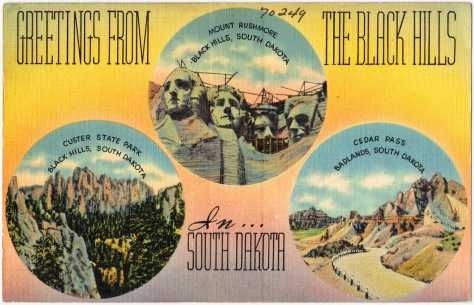 “Western civilization, unfortunately, does not link knowledge and morality but rather, it connects knowledge and power and makes them equivalent.” ~ Vine Deloria, Jr.

Four lines scribbled on the back of the postcard – one from each grandparent:

‘Dig until you have an original source. Then plant a seed of remembrance.’ Grandma Grant

‘Perspective’s like a cue ball – you’ll get a ’round’ to it.’ Grandma Emery

Ashley reread the messages on the back of the postcard, aware of the ugliness behind the Mount Rushmore monument. While history didn’t hold the same interest as astronomy, literature, and the arts did, he knew enough to dig deeper than what was presented. If there was one historical account of something, Ashley sought the lesser-known alternative points of view.

He smiled as he read the last line of the card. ‘You’re going to find that many of the truths we cling to depend greatly on our own point of view. ~ Wise old Jedi guy.’

No matter how many times they watched the Star Wars movies together, Grandpa Emery loved to tease about not knowing the character names well, even as he was a font of knowledge about the characters’ histories and the actors’ projects.

Even if Ashley saw the finality to the original question he asked his Uncle Jerry years ago, would it be enough to put all of this to rest? Or was it possible, with these various travels, that seeds had been planted for remembrance?

Only time would tell.