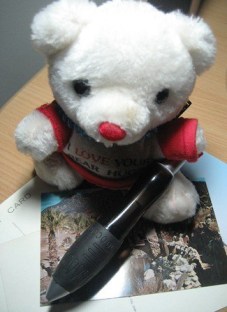 Today’s snippet’s inspired was inspired by the Daily Prompt, “When you’re unwell, do you allow others to take care of you, or do you prefer to soldier on alone? What does it take for you to ask for help?”

From the SoCNoC Project, “Sights on the Storm”

Vincent crossed his arms and waited for a response to his presence in the doorway. In the beginning, Dora responded with ‘bully bears,’ ‘outta here octopi’ and any other stuffed animal she could lob into the air, none of them making it past the foot of the bed.

Now she resembled her Aunt Heloise, sobered by pain, drunk on cough syrup. He didn’t have to mention the observation as he saw the increased ugliness from the young woman who professed profanities, called out curses and gestured germ-laced words he knew she learned too young.

“Dorinda Casey Russell, it isn’t too late for me to wash your hands with soap.”

Instead of a weak smile or short chuckle, the young woman stretched to her full length in bed, all the while holding up a middle finger to her father. Yes, this was his child he no longer saw eye-to-eye with whenever she stood straight.

“I’m fine,” she said. Vincent didn’t have to hear her to know it was a lie.

“Sendak? Seriously?” The sarcasm soared the more she was sore – that was a constant, be it cold or flu, migraines or measles.

The svelte man bit the inside of his cheek, curious if he had made it this hard on his parents when he was her age.  Then again, he was busy balancing classes, changing diapers and collecting records for the corner store he hoped to start. “You’d rather I throw ‘Chicken Soup for the Soul,’ your way,” he asked. “Or should I just find your gadget so you can plug in and tune out rather than sleep?”

“I’m going to work.” She turned on her side, eyes narrow to supposedly intimidate him, when they both knew it was to hide the pain.

“Told your boss ‘no’ and she agreed.” Vincent hated to see her suffer. If it was either of her brothers or Adele, Dorinda was right there to doctor them. Reverse the roles, however…  He didn’t think he taught her that – to be so stubborn. Then again, he could be wrong; he had that feeling too often lately.

He grabbed the cell phone from the nightstand before returning to the hallway. “You’re going to sleep.” His shoulders relaxed as her eyes closed and her breathing slowed.